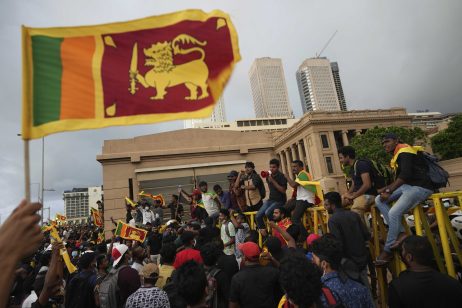 -Manasvi Vashisth and Asra Malik
Sri Lanka, is facing the worst economic crisis since its independence in 1948. The government has declared a state of emergency due to the eruption of violent public protests in various parts of the state. With the resignation of the cabinet and political impasse has culminated in a political crisis. There is a row of anger against the family rule of the Rajapaksas, and people staged violent protests and raised slogans of “Go Gota Go” in front of the President’s residence on April 1, 2022.

FACTORS IN PLAY: TRACKING THE EMERGENCE OF THE CRISIS

The condition of the country is dreadful with people having no stable access to basic commodities such as cooking fuel, pulses, rice, etc. The low foreign exchange reserves have resulted in the inability to import fuel, food, and even life-saving medicinal drugs. There has been widespread anguish against the government for mishandling the economy and people demand the resignation of President Gotabaya Rajapaksa. But, the economic crisis in Sri Lanka is not a sudden eruption. A whole lot of factors played role in bringing down the Sri Lankan economy at its worst.

Corruption and Mishandling of Administration

Post-war Sri Lanka saw mishandling of funds and high rates of corruption in the state system. The Family rule of the Rajapaksas saw rampant corruption, with close allies benefitting from lofty positions in the government and a huge inflow of state funds.

“Today Gotabaya, Mahinda, their two other brothers, and Mahinda’s son oversee departments and agencies that collectively control nearly 70% of the island’s budget.”

The authoritarian regime of the Rajapaksa brothers has pushed the country into a vicious cycle of corruption and human rights violation. The lower rate of transparency in government offices has contributed to the misappropriation of funds, which pushed the country’s economy downhill.

The Sri Lankan economy was under a slowdown before the pandemic. The COVID-19 pandemic further wreaked havoc on the economy of Sri Lanka and worsened its condition. The island nation majorly survived on tourism, remittances, and the export of tea for its economic survival. With the spread of the pandemic, the tourism sector had a major hit back with the imposition of worldwide travel restrictions.

The informal sector which accounts for 60% of the total workforce, was affected because of the imposition of lockdown. Remittances from the Sri Lankans earning abroad fell drastically due to income cuts during the Lockdown period. This led to the shortage of forex reserves, which stand at $2.31 billion as of February 2022. “The reason for the shortages is not a shortage of any commodity but the shortage of dollars”, said Dhananath Fernando, chief operating officer at Colombo think tank Advocate Institute.

Sri Lanka accrued debts worth $35 Billion in 2021, to give a boost to infrastructure development. With the shortage of Foreign currency reserves, it has become problematic for Sri Lanka to repay the loans. China accounts for 10% of the total debt amount in the form of concessionary loans. With just $2.31 Billion in the Forex reserve, it is bound to repay loans worth $7billion in 2022. The International Monetary Fund  made a statement reviewing the economic condition of Sri Lanka, saying “public debt has hit unsustainable levels and foreign exchange reserves are insufficient for near-term debt payments.”

The Rajapaksa government in its decision to implement organic farming announced a 100% cut in the import of fertilizers in 2021. This decision was a hasty one and came overnight. It had a major impact on the agricultural sector with production levels stooping low. The Farmers of Sri Lanka staged protests against this ban on the import of fertilizers, as they saw a decline in the levels of crop production. This decision had a major hit back on the agricultural sector, repercussions of which are being faced today with the country slipping into an outbreak of subsistence crisis. The cutting down of tax rates as announced in the election manifesto led to a fall in the state’s income with no alternative sources of income in place.

CURRENT SITUATION: A PEEK INTO THE HARDSHIPS OF SRI LANKAN PEOPLE

The current situation in Sri Lanka is dreadful. The economy is in shatters and people are facing bigtime hardships. There is a lack of basic commodities. Inflation has peaked at nearly 15% making it difficult for the people to sustain themselves. The Sri Lankan government announced a nationwide power cut of 7 hours on 2nd April owing to the severe shortage of fuel required for the production of energy. Kilometers long queues have become a common sight for the public.

People have to stand in long queues to collect basic commodities such as cooking fuel and food items. The government had to deploy army units outside the fuel stations to prevent violent outbreaks. Examinations of students had to be postponed due to the lack of paper and the inability of the government to import. Many surgeries in the hospitals got delayed due to an acute shortage of life-saving medicinal drugs and long hours of power cuts. The people are in desperate need of support as they have lost faith in their government.

India not only shares proximity with the island nation but also a history of cultural and social heritage. India’s foreign policy always aims at initiating a helping hand to other countries, especially, under the “neighborhood first policy.”India provided a financial package of  1 Billion USD as a credit measure to Sri Lanka intending to help neutralize its wrecked economy and to means for some necessities and keep the hiking fuel and food prices in check.

New Delhi gave Colombo a 500 million rupee short-term loan in February to fund the purchase of petroleum goods on behalf of the Sri Lankan government through the Ministry of Energy and the Ceylon Petroleum Corporation. Sri Lanka received 100 tonnes of nano nitrogen liquid fertilizer from India after the country’s government banned chemical fertilizer imports. They provided 5,000 immunizations as well as other medical aid. In critical industries such as ports, renewable energy, manufacturing, and others, Sri Lanka has seen an increase in investment. Sri Lankan Foreign Minister G.L. Peiris said that India’s support has made a “world of difference to Sri Lanka’s economic situation”.