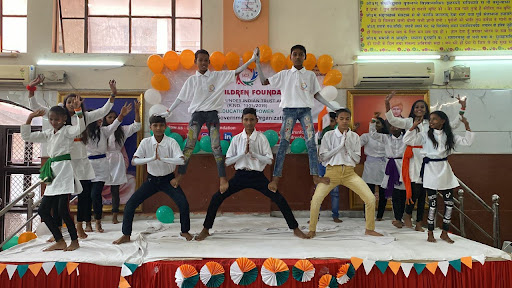 The Independence Day celebration of SKCF happened on 14 August 2022 in Janakpuri. At SKCF, we call our volunteers superheroes and our organisation a family. This family comprises our students, volunteers, directors and associates. Why do we refer to our organisation as a family? It’s not for the namesake, rather it is how we have grown together.

And what family doesn’t celebrate festivities together?  So, as always, our volunteers and students came together to make the best of India’s 75 years of Independence! If you could not join us in this Independence Day celebration, we have you covered!

The hall was abuzz with the excitement of the event. Volunteers and mentors of SKCF had worked hard for a week, training the students for various performances. Even on the day of the Independence Day celebration, many volunteers came early to decorate the venue After all, that’s how a family is. The entire hall was decorated with balloons, flags and posters.

The volunteers made the hall lively as well as helped the students get ready. From their make-up to costumes, our volunteers managed everything. The hard work of the on-ground teachers, Raghav Sir, Prerna Ma’am and Aditya Sir in training all the students for the various performances that would take place that day was much awaited in this exciting Independence Day celebration.

SKCF’s Independence Day Celebration was graced by the presence of Wing Commander Nirmal Kumar, who was felicitated and lit the lamp to invoke the blessings of the Lord. Our guest of honour along with Dr Vinay Sahni, Raghav Sir, Prerna Ma’am, Aditya Sir and Rajiv Sir hoisted the National Flag. This was followed by the National Anthem, officially beginning the Independence Day celebrations.

The Executive Director of SKCF, Ms Prerna Jain, addressed the audience, enlightening them about the journey of SKCF. She talked about the growth of our NGO from its foundation year 2016 to 2022 and the major milestones that were achieved during this period. The Founder of SKCF, Mr Raghav Sharma, talked of what nationalism is all about. He expanded on the variety of ways in which people, from all walks of life, express their nationalism. It was surely a heart-touching speech!

Perhaps the most exciting part of the Independence Day Celebration was the cultural performances by the students of SKCF. Our student began the line of events by pronouncing the thought of the day. It was followed by a Radha-Krishna dance, which was absolutely delightful. A group of young boys performed on patriotic songs. Our girls also gave a spectacular group dance performance. The students who participated and performed were given costumes as per their performances.

The closing ceremony of the grand Independence Day celebration was accompanied by an oath administered by Rajiv Sir and the vote of thanks by Aditya Sir. The volunteers who had worked hard to make this event such a huge success were rewarded with an after-party! The volunteers enjoyed their time together, playing antaakshri and munching on pizzas (Yes, that’s what we do after every successful event!) Overall, it was a wonderful day that celebrated our nation, our organisation, our family, and our students.