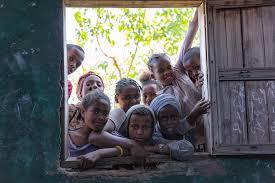 Child poverty can be defined as the condition of children from poor families (and often orphans) growing up with scarce or non-existent resources. Children in India and across the globe lack basic sanitation, education and healthcare facilities that are both a necessity and the right of every individual.

Children living in poverty are very often born to parents living in poverty, thus, creating a cycle. There are many challenges that become the major obstacles in their development : high child mortality rates, lack of education about contraception, patriarchal value systems, forced marriage, religious beliefs and support to the extended family etc.

A lack of basic but essential amenities such as education, healthcare, a balanced and nutritious diet and clean water has become rampant. Poverty can lead to exclusion within the society and exclusion can also result in poverty thus making it a never ending cycle. If children and their families have the additional complication of being discriminated against based on their gender, religion, ethnicity, social class or political allegiance, then it becomes another major factor that can perpetuate the cycle of poverty.

There are attempts on a global level to eradicate poverty. Still, close to 736 million people are living in extreme poverty. Children are disproportionately affected and despite comprising one third of the global population, they represent half of those struggling to survive on less than $1.90 a day.

UNICEF claims that across the world, about one in three children – roughly 663 million – live in households that are multidimensionally poor, meaning they lack necessities as basic as nutrition or clean water. Worldwide, the poorest children are twice as likely to die in their childhood than their wealthier counterparts. Sadly the eradication of child poverty has been the national priority of only a few countries in spite of its crippling effects on health and wellness, like mental health problems, poor sense of well-being,

India is home to over 30% of global poverty, out of which  nearly 385 million children live in extreme poverty, the highest in south Asia. According to an analysis from the World Bank group and UNICEF, children are more than twice as likely as adults to live in extreme poverty. Launched in 2012 in partnership with End Child Poverty, India Poverty Solutions is a children and youth-led initiative of Shanti Ashram, a Gandhian-ideology based organisation located in India. It unites children and youth to work together and find simple and effective solutions to child poverty. This initiative aims to mobilise at least 1,000,000 children and youth volunteers belonging to the major faith traditions of India, as ‘Poverty Solutions Ambassadors’. While there are gentle but effective steps such as mentioned above being taken to eradicate poverty, we need more than this to eliminate the evil that is deep rooted into our society. Our country has no scarcity of funds, the problem lies in its appropriation. Symbolic gestures like statues and temples take away most of our hard earned money, while our country suffers in neglect.

Dharavi is a locality in Mumbai, India which is considered to be one of the  largest slums in Asia and is counted among one of the most densely populated areas in the world. In this place, children’s safety is at risk everyday due to omnipresent crimes and inaccessible education and basic facilities. We need to wake up and raise our voice because if not now then when?

There are various non-profit organizations that work selflessly day in and day out to provide the luxury of education and childhood that would otherwise have been unaffordable. SKCF is one such organization which  is involved in such noble deeds that  help these children see a better tomorrow. The volunteers of this organisation have worked tirelessly in order to ensure that at least a few of the many children can be helped. SK Children Foundation organizes food donation drives and feeds hungry people in order to reduce the number of people that go to sleep hungry everyday.They teach underprivileged children and take full responsibility for

their books and stationary, giving them the full experience of studying in a school while having fun on Sundays and routine PTMs with their families.

Do you remember the last time you saw a child knocking on the window of your car, begging for money, to buy something to eat? Poverty has penetrated deep into our society and presents itself in different forms. It definitely gives us more to think about and reflect on how child poverty is a problem that needs to be addressed as soon as possible. We need to support organizations like SKCF by contributing in their good work to our fullest capacity. We shall have to identify ourselves not with our country or religion but as humans first and foremost to protect the humanity. We are facing a humanitarian crisis and the very idea of ‘humanity‘ is at risk. Each drop makes an ocean and each step counts. Meticulously,  we’ll keep walking on the road of reforms. Children are God so to serve them is the greatest worship. Governments will exercise their roles but we cannot forget ours. Feed the stomachs of these children and it will definitely give a feeling of fulfilment.