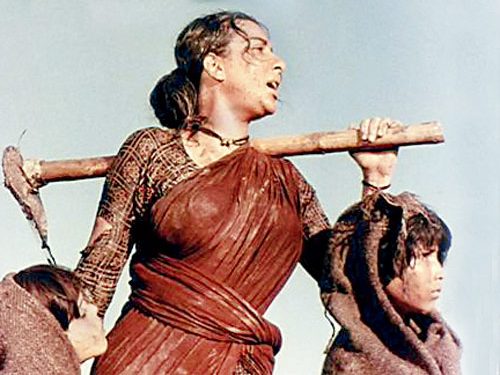 -By Shreya Pandey and Shobhita Gulati

Beginning with Dadasaheb Phalke’s first feature film in 1913 to Ardeshir Irani’s first talkie in 1930, Hindi cinema has a long story to tell. Hindi cinema transitioned from silent to talkie, and colours entered the film industry. By the 1980s, Hinglish began to replace Hindustani, which ruled Bollywood for decades. But one thing that still finds a place in this world is the portrayal of women as the second sex. Women as followers, supporters, and victims, not as leaders.

Although there were strong female characters like the matriarch in Biwi Ho To Aisi, the overall fraction of such movies is negligible. Hindi cinema has a fascination with passive female characters who are portrayed as submissive housewives, mothers, loving sisters and so on. Women are barely portrayed as an individual in themselves.

Let’s trace the evolution of Hindi cinema in relation to its female characters.

It was a time when the Hindi cinema was going through a change in terms of its content. The movies centred around the theme of Indian independence and the pain of partition. Films like Mother India (1957) imagine women to be equally faithful towards their domestic duties and duties towards the nation, but most films do not see them as independent characters. The Hindi cinema depended upon female vamp portrayals for the commercial success of the films.

Even in the golden era of Hindi cinema between the 1940s and 1960s, the patriarchy laid films continued sidelining female characters. The 1970s and 1980s were a period of relative stagnation for Bollywood, with films on the overused theme of dacoit and crime featuring female characters merely for decorative purposes.

Regarded as the era of the new Bollywood, the 1990s depicted women as the love interests of male protagonists, solely existing as melodramatic supporting characters.

The 1990s saw the rise of new Hindi cinema, giving Bollywood the three Khans—Aamir Khan, Salman Khan, and Shahrukh Khan. Mene Pyaar Kiya, Hum Aapke Hain Kaun, Dil wale Dulhaniya Le Jayenge, Dil to Pagal Hai, Kuch Kuch Hota Hai, and Raja Hindustani were among the blockbusters produced by this new Bollywood. The leading stars in the industry changed, but what remained intact were the traditional gender roles. From the beginning, Hindi cinema needed a damsel in distress whom the male protagonist tried to save from evil.

The trend of item songs further objectified women by satisfying what Laura Mulvey, a feminist media scholar, calls the ‘male gaze.’ The other problem with the idea of item numbers is that they normalise the harassment and stalking of women. Moreover, the Bollywood gender pay gap further shows the mentality of this star-studded industry.

Despite all the odds women today are not looking back. They are determined to fight back. Female actors are choosing well-crafted scripts, that portray women as strong-headed and determined, smashing the patriarchy. Let’s look at some of the strong female characters that Hindi cinema has churned out recently. The ones who portray the true potential of womanhood, strength, and power.

When we talk about women-centric films in Hindi cinema, this latest movie tops the chart. Alia Bhatt beautifully played the strong role of Gangubai in the film, leaving a deep impact on the audience’s minds. et against the gritty backdrop of Mumbai, This movie tells the story of many young women who were sold off for a few hundred, solely through the eyes of its protagonist Gangubai. The story brings out the harsh reality about our society, and the lives of sex workers and raises some hard-hitting questions.

In this film, Sakshi Tanwar plays a middle-class woman who witnessed her daughter, Supriya, being hit by a truck. Soon after the accident, she realizes that it isn’t simply a hit-and-run case, but rather something ominous is at play. This compels her to discover the truth. Sakshi Tanwar is perfect and dominates the screen playing a grieving mother who transforms from being naive to merciless after the tragic incident: her agony at not knowing who killed her daughter is palpable. She is every bit convincing.

A horrifying tale of rape and murder, NH10 looks into the dark horrors that Meera experiences. Anushka Sharma plays the role of a woman who fights for justice and defends herself in the most ghastly circumstances. She shows the true spirit of womanhood and power and refuses to give up in this patriarchal world. Anushka excels as Meera on whose glossy life dark horror descends.

When we talk about the strong portrayal of womanhood this film can’t be left behind. This movie portrays a woman who finds out about people accused of child trafficking. It is a story of a lone warrior who takes on gangs of men single-handedly. Mardaani shows the real, gruesome, and shabby truth with utmost bravery and brilliance. Rani Mukerji does complete justice to the role of Shivani Shivaji Roy and adds the required punch at many places in her signature style.

There are many such women-centric films such as Mary Kom, Queen, No one Killed Jessica, Lipstick Under My Burkha, Mom, Gunjan Saxena, Fire, Dangal, Thappad and the list is growing. But we as the audience must learn to appreciate these women-centric movies. If we want Hindi cinema to change for the better, it is we who must step!