WALKING THROUGH THE HISTORY OF THE ROE V. WADE CASE 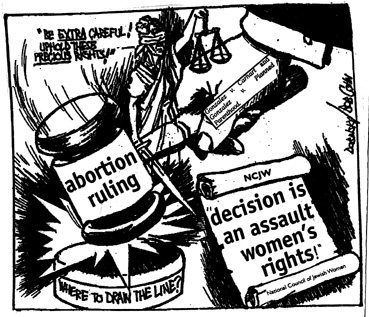 In a historic decision, the U.S. Supreme Court officially reversed Roe v. Wade on Friday, 24  June 2022. It was declared that the constitutional right to abortion no longer exists. The Supreme Court’s decision to overturn Roe v. Wade and an affirming ruling in 1992’s Planned Parenthood v Casey effectively will eliminate abortion access across more than half the US and force many pregnant women to carry their pregnancies to term unless they can travel to a few states having abortion protective laws.

This decision of the U.S Supreme Court has gathered a lot of attention and criticism, especially from women who feel outrageous because some men decided for their bodies. Women believe that they are being forced into motherhood and that this is a war against them. People are protesting in many cities, including thousands demonstrating against the decision outside the barricaded Supreme Court. Thousands chanted “We will rise up!” in New York.

Now to have an opinion on the overturning of the Roe v. Wade case it’s important to know its history and certain facts therefore let’s walk through the timeline given below to know who Roe was, what she wanted, and how this case became the most debatable and controversial case in U.S. history.

WHO WAS ROE AND WHAT SHE WANTED

The case was brought by Norma McCorvey also known by the legal pseudonym “Jane Roe” who became pregnant in 1969 with her third child. She wanted an abortion, but she lived in Texas where abortion was illegal, except when necessary to save the mother’s life. Her attorneys, Sarah Weddington and Linda Coffee filed a lawsuit in the federal court against her local district attorney, Henry Wade, alleging that Texas’s abortion laws were unconstitutional.

Roe received a lot of criticism in the legal community, some who were in the support of abortion rights thought that Roe reached the correct result but in the wrong way. Some thought it laid a foundation for abortion in civil rights rather than human rights, which is a broader category and would require government entities to take measures to ensure every woman has access to abortion.

Some were so opposed to both Roe and abortion rights that they, in January 1974 on the first anniversary of Roe, gathered in Washington D.C. for the “March for Life” rally. Since then every year, on the anniversary of the decision, opponents of abortion march up Constitution Avenue to the Supreme Court Building in Washington, D.C., in the “March for Life” in the hope that their protests result in changing the law. 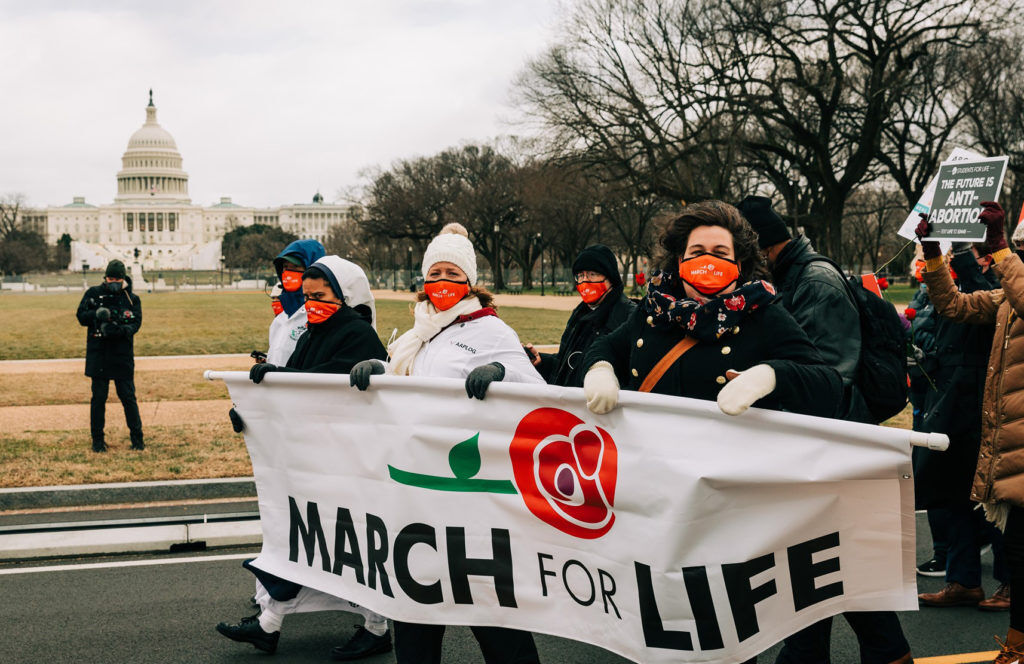 In 1976, the US Congress passed the Hyde Amendment, a restrictive measure that prohibited the use of federal funding to pay for abortions except in the case of rape incest, or threat to the life of women.

In 1986 Missouri’s governor signed into law a number of restrictions on abortion, and several of them were subjected to court battles. In 1988 and 1989, Pennsylvania lawmakers amended the state abortion act of 1982 adding five provisions including informed consent before an abortion, a 24-hour waiting period, consent of one parent in case a minor has the procedure, and a husband notification requirement in case of a married woman. It was challenged by abortion clinics and physicians as unconstitutional. 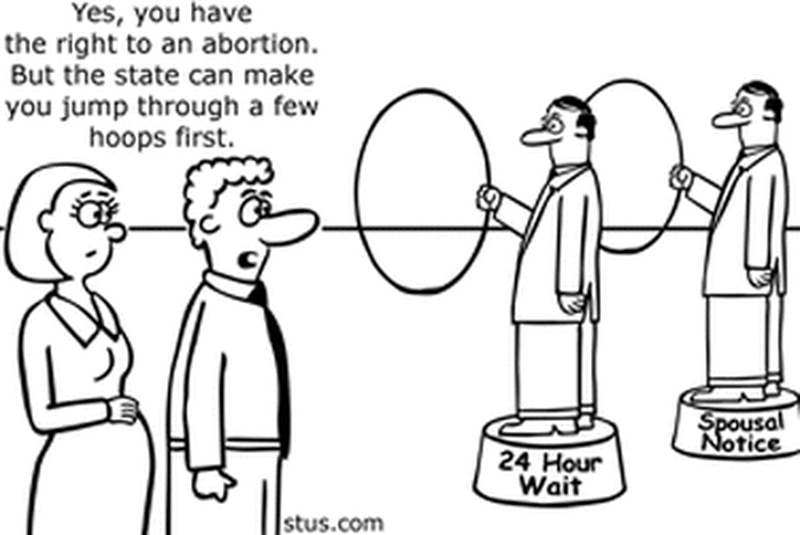 In July 1989, Supreme Court’s ruling in Webster v. Reproductive Health Services upheld the law that the state of Missouri enacted barring public employees and public facilities from being used to assist or perform abortions unless it’s necessary to save the life of a woman.

In June 1992, Planned Parenthood of Southeastern Pennsylvania v. Casey, the bench of justices stated that abortion-related legislation should be reviewed on the basis of the undue burden standard instead of the strict standard from Roe. The Supreme Court notably revisited Roe v. Wade in 1992 when reviewing the case. In that case, the Court once again supported a pregnant person’s right to choose abortion. But, it changed the framework created earlier in the case of Roe. Instead of regulating abortion based on trimester, the Court created a standard based on “fetal viability” – the fetus’s ability to survive outside the womb.

In June 2016, in Whole Woman’s Health v. Hellerstedt, the Court ruled 5–3 that Texas shouldn’t place restrictions on abortion services that create an undue burden for women seeking an abortion. If we go behind 3 years, in 2013, Texas passed H.B. 2 which placed restrictions on abortion clinics within the state, one requirement was for the abortion providers to have difficult-to-obtain admitting privileges at a hospital within 30 miles. Admitting privilege is, basically, the right of a doctor to admit patients to a hospital for medical treatment without first having to go through an emergency department. The result of this restriction was the decline in the number of abortion clinics. Law also required abortion providers to upgrade their infrastructure and facilities up to the standards of a hospital room. Whole Woman’s Health didn’t understand the need for this and regarded these requirements as money-consuming. They thought of it as an attempt to limit abortion access.

It is the historic legal case related to the state’s 2018 “Gestational Age Act”, in which the U.S. Supreme Court in June 2022 overturned two of the most historic Supreme Court decisions, Roe v. Wade and Planned Parenthood of Southeastern Pennsylvania v. Casey, that had established abortion as a constitutional right. Mississippi, the state appellant in Dobbs v. Jackson Women’s Health Organization brought a new perspective to the vision that the laws that ban pre-viability abortions are not necessarily unconstitutional. The state argues that no constitutional text, tradition, or history supports the right to abortion. This decision of the supreme court gave the states freedom to foist restrictions on the availability of abortion and even to put a ban on it entirely.

On the 2nd of May, Politico published a leaked draft, a draft of hopelessness and a nightmare for many people. The draft opinion, written by Justice Alito stated that “Roe was egregiously wrong from the start” and “we hold that Roe and Casey must be overruled.”

The overturning of the case was not final till then but everyone knew the day was not far, abortion activists started bracing for the loss they were about to experience.

On Friday, June 24, the news broke all over the world that the Supreme Court of the United States overturned Roe v. Wade, giving states the authority they wanted over the years i.e., the authority to put an abortion ban. Roe v. Wade case was the only thing protecting a person’s right to abortion. And now suddenly, abortion was no longer a constitutional right in the country. This decision came as a result of Dobbs v. Jackson Women’s Health Organization.

According to CNBC, 3 Justices dissented and wrote  “With sorrow — for this Court, but more, for the many millions of American women who have today lost a fundamental constitutional protection—we dissent.” 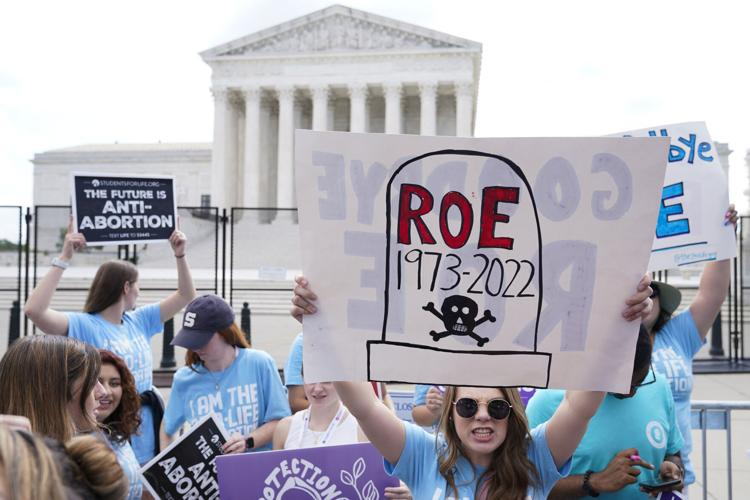 In the next article, we would cover the aftermath of the overturning of this case, what are the various opinions of women across the world, what are the pros and cons of the case, and how the judgment will affect society as a whole and especially women.

Till then stay tuned!