Top 10 Places To Visit In Chittorgarh 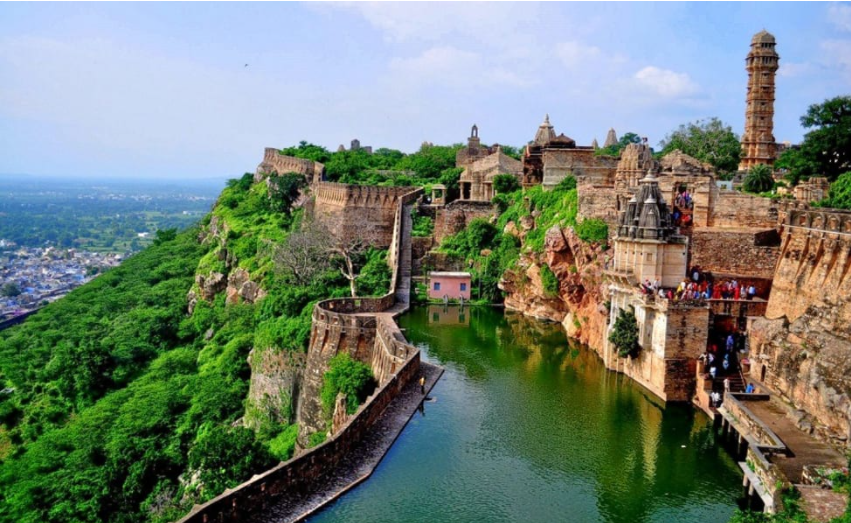 Chittorgarh, originally known as Chitrakut is a city located in South-Eastern Rajasthan.Chitrangada Maurya built this city. Bappa Rawal made it the capital of the kingdom of Mewar. It holds within it the stories of bravery and sacrifice. Glorified with rich history, Chittorgarh is an exquisite place to visit. Top 10 places for anyone visiting Chittorgarh are:

Along with being the largest fort in India as well as Asia, the massive fort is also a UNESCO World Heritage Site. Covering about an area of 700 acres it stands on the top of a hill. Within it, the complex has 7 gates, 4 palaces, 19 temples (main), 4 memorials and 20 water bodies( working at present).

Also known as the Victory Tower, Vijay Stambha lies within the walls of Chittorgarh Fort. Maharana Kumbha built this victory tower to symbolise his victory over Mahmud Khilji. It is a 9-storeyed building. One can view the whole town from the top of this magnificent structure.

The Padmini Palace was the residence of the beautiful and valorous Rani Padmini. It is a 3 storeyed white building. Surrounding it is the enticing lotus pool. Located in the southern part of Chittorgarh Fort, the palace is architectural excellence.

Rana Fateh Singh built this structure. It shows glimpses of Rajasthani as well as the modern style of architecture. This double-storeyed palace has now been converted into a museum. The palace thus gives an insight into the history of Chittorgarh and is an important tourist attraction of Chittorgarh Fort.

Bappa Raval built this palace situated near Vijay Stambha. Later, Maharana Kumbha restructured it. Though now present in ruins, the palace is elevated by the legends of Panna Dhai, Rani Padmini’s Jauhar and Meerabai’s devotion.

Gaumukh Reservoir in Chittorgarh is nature’s beauty.It is covered with several water bodies such as ponds, step wells. baolis, kunds. Thus, it is famously called Water Fort. People belonging to Hindu religion consider this place sacred. It is the favourite spot for visitors to feed the dwelling fish.

Kirti Stambh is a famous ancient tower, also known as the Tower of Fame. It was built in the 12th century as a dedication to the first Tirthankara of Jainism, Adinathji. It is situated inside the magnanimous Chittorgarh Fort and has 7 storeys with a narrow and steep staircase. It has been built in the Solanki style of architecture.

Before being dedicated as a place of worship for Mata Kalika, an incarnation of Goddess Durga, this temple was used to worship the Sun. The architecture of this ancient temple built in the 8th century includes intricate carvings and embellishments.

Sita Mata Wildlife Sanctuary is located in the Chittorgarh and Pratapgarh districts of Rajasthan. It has mythological importance attached to it. It is believed that Valmiki Ashram, mentioned in Ramayana is situated in this forest. It was here that Sita spent her exile days and also gave birth to her twins Luv and Kush. This sanctuary is famous for its flying squirrel. The forest area has trees such as Gulmohar, Sindoor, Rudraksha etc. This place was declared as a protected forest area in 1979 by the Government of Rajasthan under the Indian Wildlife Protection Act, 1979.

The sanctuary is a quiet and peaceful area amidst nature. It shelters various animals such as Hyenas, Jackals, Panthers, Wild Boars etc. Bassi Dam, which is also another tourist attraction is nearby this place. Though the sanctuary is open to all visitors throughout the year, it experiences the best of its beauty during October and November.

Traveller Tips while visiting the fort