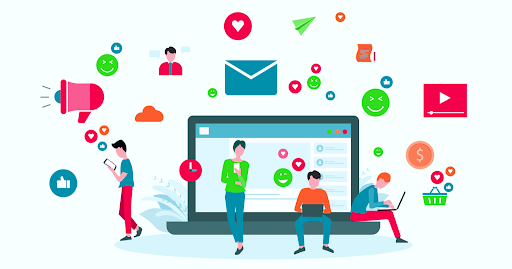 “Don’t use social media to impress people, use it to impact people.” – Dave Willis

What are social media influencers?

The rise of social media influencers

In the worldwide lockdown, everyone turned to their phones for some solace in a pandemic-ridden world. There was a brand-new profession on the rise. Everyone who had an opinion on anything could post videos about it, put on a filter and a catchy song, and another influencer was born. From home models to food influencers, the Internet now has them all.

Earlier, it required extensive knowledge to educate your audience about a topic. Before the pandemic, a few choice Internet celebrities ruled the recommendations area of YouTube and Instagram. Now, the web is flooded with these self-proclaimed influencers. They take it upon themselves to share their opinions and lives viewed by the younger generation. For this new brand of ‘influencers’, the goal is to see who gets the most likes and comments, when it should be who has the most knowledge.

How do they impact the youth?

While scrolling through the reels section on Instagram, sometimes we see people using stuff that we like. That gives us the motivation to find out more about them, and we discover more about their lifestyle and the other products they use. Unknowingly, we have bought into their strategy of making us buy stuff we don’t need. A certain type of mug that makes everything aesthetic, or maybe a certain style of sunglasses that everyone uses with a heavy filter – this is one of the impacts they have.

Gone are the days when a celebrity holding a product on our televisions encouraged us to buy it. We now live in an era where all it takes is one real-life usage of said product, and it’s in our homes.

A person who has the backing up of a thousand likes and comments on their videos is automatically taken as someone trustworthy. However, since most of these social media influencers are themselves in their late teens or early 20s, their definition of what is right or wrong might not necessarily fit into what children are taught at home. These ‘micro’ and ‘nano-influencers’ portray more authenticity because of their relatively smaller fanbase. Content Creators, who hand out life tips, based on their personal experience, are especially harmful to the younger generation. The content that might be ‘meaningless’ to a person can have very large repercussions for another.

Take the example of the Fyre Festival, which took place in 2019. It was endorsed and promoted by multiple celebrities, models, and social media influencers. It was supposed to be a high-luxury festival for which customers had paid hundreds or thousands of dollars but instead resulted in cheap facilities. This event, having no prior credibility whatsoever, was singularly popularised by social influencers. It resulted in thousands of people being duped.

Promotions may also include products that are harmful to you. Still, since the influencers are being paid for it, and the viewers have an indefinite trust in them, it leads to negative promotions.

While it is admirable that the youth is creating new growth opportunities for themselves, it is also alarming. They hold power in their hands that they do not seem to understand. The most significant selling point of these influencers is that they are perceived as one of us, not a celebrity, but a normal person with a normal life, and therefore, more trustworthy.