THE MAN WHO SHOOK THE BRITISH EMPIRE: SHIVARAM RAJGURU 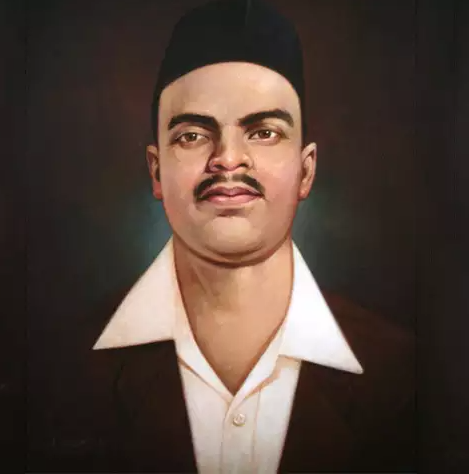 “I am, like you, proud of what I have accomplished. I have come to realize this truth only after challenging death. If we are able to show even a glimpse of freedom to our fellow nationals by sacrificing our lives, they would be able to walk on that path by themselves.

This death, then, would be a blessing for us.” replied Rajguru, to his associate Shiv Verma on being asked about his fear of death.

The youngest of the valiant trio and a close companion of Shaheed Bhagat Singh was Shivaram Rajguru. Born in 1908, Rajguru was a staunch opposer of British rule over the motherland. He always dreamt of freedom for his country. He was highly agonized at the condition of his fellow countrymen under the oppressive Raj of the Britishers. At the age of sixteen, Rajguru left his home over an argument with his elder brother and found it as an opportunity to break free of family indulgences and devote himself to the motherland. The headstrong young man held the spirit of fighting the British and putting an end to the atrocities.

Rajguru came to Varanasi at an early age. He attained education in Hindu scriptures and Sanskrit. He was an intellectual being. Descending from the land of the Marathas, he was an admirer of Chhatrapati Shivaji Maharaj. He was deeply inspired by his heroic personality and Guerilla war tactics. Keen on driving the British out of his motherland, Rajguru became a member of various associations. He soon became a close companion of revolutionaries named Shaheed Bhagat Singh, Chandrashekhar Azad, Jatin Das. Rajguru devoted his life to the service of the nation.

Once Azad caught Rajguru holding a hot iron bar, and out of inquisitiveness, he asked him why would he hold the iron rod? Rajguru smiled and replied,’ I wanted to test my ability to suffer police torcher’.

HSRA, or Hindustan Socialist Republican Association, was set up by Ram Prasad Bismil to fight against British rule and attain independence. Rajguru was compelled to join the HSRA after he was ignited by the fierce words of Chandrashekhar Azad. The young man had all the zeal and was lovingly known as ‘Raghunath’ by his fellow mates. He was regarded as the gunman of the party owing to his extraordinary shooting skills. Rajguru was an active member of the party and participated in various activities to bring about a revolution and change the face of India.

SETTING DOWN OF A BRIGHT STAR

One of the revolutions led by Rajguru along with his mates was that of the killing of the British police officer J.P. Saunders. The killing was to avenge the death of Lala Lajpat Rai, who was brutally lathi-charged for protesting against the Simon Commission. Rajguru along with Chandrashekhar Azad, Bhagat Singh, and Sukhdev planned and carried out the execution of the British officer.

They were soon caught and were put in jail. Rajguru along with Shaheed Bhagat Singh and Shaheed Sukhdev were put to trial and were executed on 23rd March 1931. The brave souls had smiles on their faces. They were content while they walked towards the end phase of their lives. At the age of 22, he along with his accomplice Shaheed Bhagat Singh and Shaheed Sukhdev were sentenced to death by the British.

Rajguru in his reply to a question asked by Azad regarding his biggest weakness said “Sleepiness. I, at times, may land into a deep sleep, even while standing or walking.”

The son of the soil landed forever into a deep sleep, the one he could never wake up from. Why not engrave the memories of these Bravehearts forever, till infinity! Their sacrifice can never be compared to anything except their utmost devotion to the motherland.