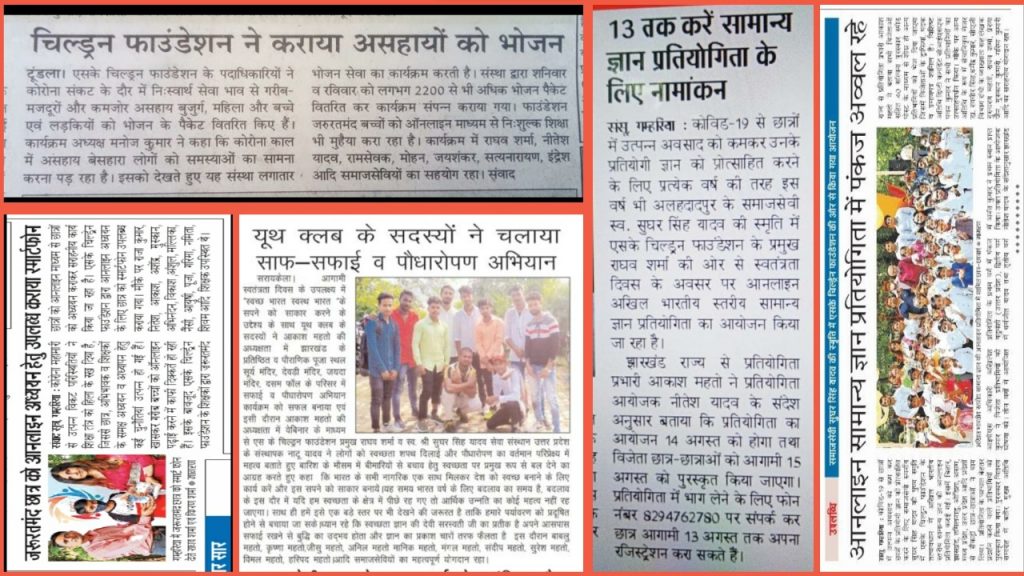 The exceptional work by our volunteers has always been appreciated by the beneficiaries. But this time we are proud to announce that we have been featured by some of the prominent newspapers of the country. It gives us nothing but more dedication to work hard for everyone.

During this tough time of the pandemic, starvation was one of the major problems for the economically weaker section. SK Children Foundation distributed 375 food packets and fruits among the needy and underprivileged people in Firozabad, Railway station Tundla, near Yagya Shala temple, and Company Bagh sports ground.

Our team also conducted another food distribution drive in Tundla. During the covid period, we distributed more than 2200 food packets to physically-challenged, elderly, poor workers, women, and children. The food drive ran for two days. In addition to the drive, we were also mentioned in the newspaper for how we provide education to children through the internet.

Youth club members of “Swachh Bharat, Swasth Bharat” organized a cleaning and plantation drive in collaboration with SK Children Foundation at temples including Surya temple, Devgadi temple, Dasam fall, and Jayda temple in Jharkhand. We gathered in a webinar in which our founder, Mr. Raghav Sharma, participated. Everyone pledged to take in a sanitation pledge. The values of cleanliness and how important it is were addressed. It was published in a big article praising the efforts of the team, along with a picture of members of the ‘Youth Club’

The results for the same competition also got published in another article. Hundreds of students participated in the competition from different parts of the country, like Madhya Pradesh, Jharkhand, Orissa, Uttar Pradesh, Assam, etc. The competition was organized into 3 sections. The winner of 1st section was Pankaj Yaduwanshu from Uttar Pradesh. From the 2nd section, the winner was Dharamjeet Yadav. From the 3rd section, it was Anant Kumar. Pawan Kumar, the deputy commandant of the CISF, gave a motivational speech to the children. At the end of the prize ceremony, Neteesh Yadav announced that the consolation prizes and certificates would be distributed by Speed Post to the other 40 participants.

Children have suffered a lot in the context of education. If we talk about the economically weaker section, lack of resources held back a lot of bright young students. SK Children Foundation provided mobile phones to needy children in Ghemriya.