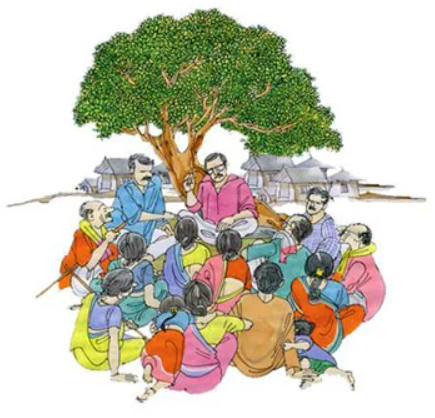 Panchayati Raj is a system of rural local self-government through which the villages of India are governed. The word ‘Panchayat’ literally means ‘assembly(ayat) of five(panch)’ and ‘Raj’ means ‘rule’. In 2010, the then Prime Minister Dr Manmohan Singh announced 24th April 2010 as the first Panchayati Raj Day. Since then, the Ministry of Panchayati Raj celebrates National Panchayati Raj Day every year on 24th April.

Evolution of the Panchayati Raj

Panchayati Raj Institution(PRI) has its roots back in ancient times. There were Indian Villages that had Panchayats or village councils having executive as well as judiciary powers. The councils used to handle issues emerging and arising in their villages.

Gandhiji believed that for the development of villages the empowerment of Panchayats was necessary. Thus, as a Directive Principle of State Policy, Article 40 was included in the Indian Constitution. It recognizes the importance of the village panchayats. It states, “The State shall take steps to organize village panchayats and endow them with such powers and authority as may be necessary to enable them to function as units of self-government”.

For the first time in 1957 the formal organization of the Panchayats was recommended by the Balwant Rai Mehta Committee. Balwantrai Mehta who was the chairman of this committee is also known as the ‘Father of Panchayati Raj’ in India. This Committee put forward the idea of ‘democratic decentralization‘ which eventually came to be known as Panchayati Raj. It also made other recommendations like the introduction of the three-tier system of Panchayati Raj and the direct election of panchayat at the village level. Rajasthan became the first state in 1959 to adopt the Panchayati Raj System.

The 73rd Constitutional Amendment Act, 1992 with its enactment constitutionalized the Panchayati Raj Institution(PRI). It came into effect on 24th April 1993. The act empowered the state government to authorize the gram panchayats. It provided autonomy to the rural local self-government to carry out the local administration efficiently.

Structure of the Panchayats

The present structure and composition of the Panchayats are under the 73rd Constitutional Amendment Act. Gram Panchayats are considered to be the basic units of the local administration. The act establishes the three-tier system of Panchayati Raj, that is, Gram Panchayat at the village level, Panchayat Samiti at the block level and Zilla Parishad district level.

There are also provisions for the reservation of seats for Scheduled Castes, Scheduled Tribes and women(one-third of seats are reserved for women).

Functions of the Panchayats

The Panchayats play a key role in the development of rural areas. They focus on resolving the problems and issues of the local people. They launch and focus on various local development programs. They perform various administrative, social and economic functions :

Through the Panchayats, the village development can be carried out effectively.

One of the biggest challenges faced by Panchayati Raj Institutions is the lack of financial autonomy. They are not able to carry out local taxation successfully. The state governments do not take many actions for the devolution of funds.

The local MLAs and MPs often interfere in the functioning of Panchayats. This reduces the credibility and effectiveness of the local institution.

Power in the hands of state

State governments, at times, do not transfer several functions to the local government. They do not allow the Panchayats to exercise their autonomous functions. They keep the power concentrated in their hands.

The unequal status of women

Women have achieved a presence in the Panchayati Raj Institutions. But what is widely witnessed is that they have not been able to exert influence in its functioning. They are often used as a proxy of their male counterparts. They are denied information and are prevented from speaking. Women have yet not been able to achieve the place they deserve in the rural local self-governance.

Achievements of the Panchayati Raj System

Despite the challenges faced by the Panchayati Raj Institutions, there have been various instances of its successful functioning. It has provided increased representation to Scheduled Castes, Scheduled Tribes and women. It has created a network to connect with people at the ground level. It has provided a shape to the grass-root level democracy.