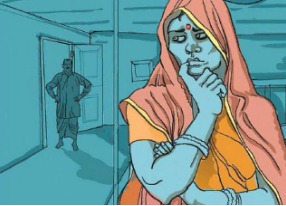 With 48 degrees around in this hot summer season, fierce heat has risen on the idea of whether marital rape should continue to be treated as an exception or sexual assault in IPC. A much-awaited and less spoken-about topic, marital rape, is now the center of attention for the whole country. A petition was filed in Delhi HC by RIT Foundation to declare marital rape a crime. Whether it would be declared a crime or not, we don’t know. It leaves us speechless how devastating it would feel to get raped by someone you know and you apparently you chose to live your life forever.

Is it forbidden to say no?

The gloomy nights become a part and parcel of women’s lives if their husbands love to have sex without their consent, abandoning women as rape victims. The states like Jammu and Kashmir stated a rate of 62% of women who didn’t have the choice to say no and are sufferers of continuous marital rapes. Quite surprising? Marriage isn’t a sex agreement, that gives the right to a husband to sexually assault his wife in the name of a relationship. It’s an alliance of two different hearts, minds, and souls. Does that mean every male/female has to get sexually assaulted and become a rape victim? It takes a lot on a female’s body to have too much sex, some include weakness, lower blood flow, and discomfort around the vulva. It’s a necessity on men’s part to be considerate about their wives, who left their parents and endowed their trust in you.

It is said that after seven circumambulations, a man and woman become companions for life. They take seven vows to always support and love each other and stand by one another in each circumstance. When there is camaraderie in each thing, then why is it always a woman, who claims to be a rape victim? With changing scenarios, some women are misusing their rights in their favor, marital rape by women or say, sexual assault of husbands is one of them. Here’s a poem expressing a man who is a rape victim:

It’s never always men who rape the women, men could also be rape victims. A survey showed that 51.2% of men have experienced marital rape at least once in their life. But that’s never highlighted, why? Reasons include many with one topping the list is that no one wants to get in trouble to go again women because of many laws that don’t even include that men could be rape victims.

A Fair Law beyond Gender Stereotypes

The debates will come and go. That political leader said this, this political leader supports this, that: it would always prevail. Some would say: “A man is a rape victim. He was sexually assaulted by her”. Many would say: “A woman is a rape victim. She was sexually assaulted by him”. The time has come to move far beyond these illogical and sophisticated gender stereotypes. We as humans should stand not stand for him/ her, rather we should stand for a human who is a rape victim. The fight should not be for men or women, it should be for one individual who suffers marital rape. Marital rape should be declared a crime, with proper undertakings so that no one dares to bring up false cases. If this doesn’t happen, one partner would keep pinning into another’s autonomy without consent, knowing that marital rape isn’t a punishable offense.

Let’s get educated in a real sense. Let’s understand the true meanings of marital rape or sexual assaults in marriage, which turns a happily living individual into a rape victim suffering panic attacks, undermining autonomy, depression, and much more distressing experiences.