How did India rescue its nationals from a war-torn Ukraine? 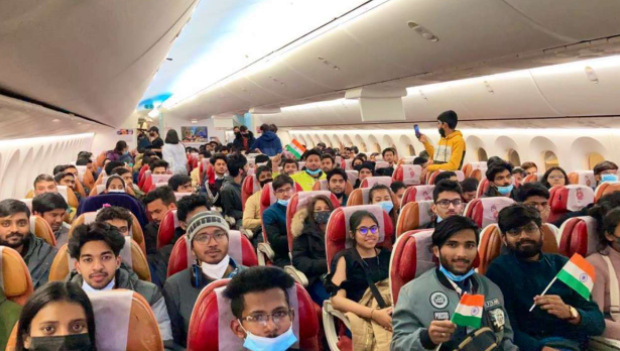 Russia led a full-fledged invasion of Ukraine on 24th February 2022. Fear and suspicion got engraved in the hearts of people. Amidst this growing tension of the Ukraine-Russia war, the Indian government undertook a rescue operation for evacuating the stranded Indian nationals from Ukraine. The initiative was named ‘Operation Ganga’, which successfully evacuated 18,000 students and Indian nationals from the war-torn country within a period of 13 days.

BACKSTORY: LAUNCHING OF THE OPERATION

Tracing the severity of events of the Ukraine-Russia war, the Ministry Of External Affairs continuously issued directories to the Indian nationals in Ukraine. The directories were to leave the country as soon as possible, as it was anticipated that Russia would anytime attack Ukraine. The situation grew intense after Moscow launched attacks on the cities in Ukraine. PM Narendra Modi in a call with the Ukrainian President and Russian President raised the issues relating to the safety of Indian Nationals. Between 26 February to 7 March, several rounds of talks were held concerning the safe evacuation of the Indian students.

The rescue operation began on 26 February 2022 in the midst of the ongoing Ukraine-Russia war. The Indian Airforce and multiple private aviation companies joined hands and began with the process of bringing back the Indian nationals to their homeland. Due to the closure of the Ukrainian airspace, it was no less than a challenge for the Indian authorities to think of ways to get the students out safely. The neighbouring countries of Hungary, Romania, Moldova, Slovakia, Poland were among those who extended support for the noble cause. The students were brought out of the war zones via the border routes. Special buses and flights were arranged for students who had reached the borders of the countries neighbouring Ukraine in the course of the rescue operation.

The Indian Embassy, Kyiv and the Ministry Of External Affairs were constantly in contact with the Indian nationals via., different channels of communication. Four Union Ministers, Jyotiraditya Scindia, Kiren Rijiju, Hardeep Singh Puri and General (Retd) VK Singh played a major role in this rescue operation and were posted in different neighbouring countries for receiving the students.

CHALLENGES THAT CAME OUR WAY

The evacuation process was challenging. India faced some heartbreaking casualties as well. One student died in the bombing, and one was severely injured. The evacuation of Indian nationals from Sumy proved to be a major challenge. The city was under continuous violent bombing, and it was quite challenging to carry out the safe evacuation. Yet, with the concerted and coordinated efforts of the Indian, Ukrainian and Russian agencies, the students were safely airlifted.

SUCCESS OF THE MISSION

The evacuation mission carried out under the name of ‘Operation Ganga’ proved to be successful. The mission is not yet complete as stated by the Indian Foreign Affairs Minister

S. Jaishankar, the Indian agencies will continue looking for the students who might have lost connection during the conflict situation in Ukraine. The Minister in a heartfelt post shared on social media, thanked the Ukrainian and Russian Government, Red Cross Society for their support and help.

Image Source- https://www.dnaindia.com/india/report-operation-ganga-begins-last-leg-
India has extended humanitarian support to Ukraine and has tried to act as a mediator between the two warring states and hopes to draw out a peaceful solution to the conflict. We hope that the war will soon come to end and peace will prevail.