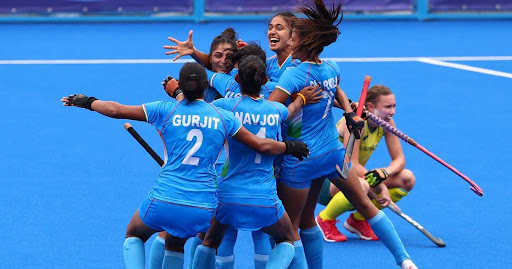 Most of us have watched the movie Chak de! India at least once in our lifetime. It belongs to the genre of fiction. However, if one happens to watch the movie now, the experience will be different. Because it is not fiction anymore. It happened! Not entirely, but it did happen at Tokyo Olympics 2020. No one expected we will watch the Indian Hockey Women’s Team reaching the semi-finals, that too wonderfully.

Come, let us get to know these women who made it possible!

From Left To Right

The Indian Women’s Hockey team did not have a glorious past like that of our men’s team. In fact, it qualified for the Olympics for the first time in 2016. At the Rio edition of 2016, the Indian team lost all its matches. However, the fact that they qualified was encouraging.

The team went on to win the Asia Cup in 2017, secured second position at Asian Games 2018 and Asian Championship Trophy 2018.

Rani Rampal, the captain, has been a perennial source of grit and determination for the entire team. It was her goal because of which the women’s team qualified for Rio Olympics 2016 and yet again it was her goal at FIH Olympic Qualifiers 2019 that booked the Indian Team a berth to Tokyo Olympics 2020.

Changes Between Rio And Tokyo

So, how did a team with no wins at Rio Olympics 2016 finished as semi-finalists at Tokyo Olympics 2020? There are multiple reasons.

Odisha Chief Minister Mr. Naveen Patnaik emerged as the last straw for Indian Hockey which was losing sponsors rapidly. Patnaik provided Indian hockey with the much-needed financial impetus and the results are in front of us. You can read more about the role of the Odisha government here.

Due credit must be given to Sjoerd Marijne who took charge of the Women’s team in 2017 as their Chief Coach. Marijne is a former Dutch field hockey player. Training with him, the women’s team improved drastically in a short span of time. Under him, the Indian women sharpened their skillset and improved their performance wonderfully.

Appreciation must also be directed at the Strength and Conditioning Coach Wayne Lombard. He too joined the Indian women’s team in 2017. After his arrival, there was a visible change in the strength and resilience of the players. He charted out daily training programs that each player had to observe without fail. And the results were visible in the way our women performed. In the game against Australia, their fitness level left the onlookers surprised.

Performance At The Tokyo Olympics 2020

The beginning was not good for the women in blue. They lost three matches consecutively. Now the only chance of them staying in the game was to win the next two matches. And just like what happened in the movie, our women went on to win both the matches!

The legendary goal by Gurjit Kaur at the 22nd minute of the game and multiple heroic saves by Savita Punia gave no chance to Aussies to score. The historic win came with a score of 1-0 and India booked a place for itself in the semi-finals by defeating the three-time world champions.

The semi-finale was proved to be challenging. Although India managed to take an early lead, it was soon equalized by the opponent Argentina. India ended up losing the match by 2-1.

For a podium finish, India played against Great Britain. The Indian women fought valiantly against mighty Britain and managed to put them under pressure. However, the final results fell in favor of the latter and India lost narrowly by a score of 3-4.

Although they did not win a medal, these women ended up winning our hearts.

Team SKCF wishes them all the best for the future. Chak de!